Farid Rasulov was born in Baku in 1985. He presently lives and works there. He graduated from the Azerbaijan State Medical University in 2006. In 2007 he decided to step aside from medicine and started to engage with contemporary art, a decision that led to his participation in the 53rd Venice Biennale, with his project “Inertia”. Rasulov works across various media, such as paint­ing, 3D graphics, animation, sculpture and installation.

For “Ornamentation”, he contributed the work Carpet Interior, an installation that reproduces a typical living room setting, with sofas, armchairs, coffee table, dining table, chairs and bookshelves complete with books, all covered in textiles printed with traditional geometric patterns taken from carpet making characteristic of the Karabakh region of Azerbaijan.

The curator says about the artist’s work:

Farid Rasulov pays tribute to the ancient silk route between Europe and the orient by confronting the Venetian palazzo with traditional Islamic patterns. Carpets with Azerbaijani ornaments are covering a whole scene creating a shift in space.

Passing by Palazzo Lezze, the venue of the exhibition, and looking towards the entrance, the interior looks like a traditionally decorated reception room or a Persian carpets showroom, where one is welcomed and seated, offered tea and snacks while discussing carpets and decoration. It almost gives one the feeling of entering another far away world, certainly far from Venice and Europe, one can almost smell the fragrances of the teas, the spices, the sweet cakes typical of the region.

If it wasn’t for the big sign in the campo (Venetian square) or for the huge banner hanging on the palazzo, one would probably mistake the place with a middle eastern style tea room or a carpet showroom.I remember having read somewhere that on the opening of the exhibition, the pavilion served tea and traditional sweets, but I am not sure where I read that and I can’t seem to find the information! 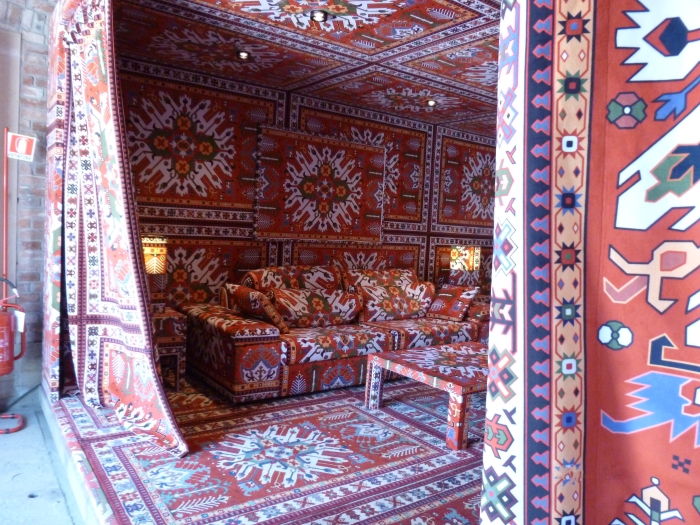 A little background to Azerbaijan’s carpets

Carpet making has been an important craft and an even more significant cultural reference in Azerbaijan since the Bronze Age. Carpets hide coded messages in their decorative geometric patterns. Carpet weaving was traditionally reserved to women, and also formed a part of their dowry. Geometric and floral ornaments developed with the diffusion of Islam and the religion’s restriction in the figure representation. Carpets can be tied or woven, and a number of carpet making schools exist, identifiable with different regions: Guba, Baku, Shirvan, Gandja, Gazakh, Karabagh, Nakhtchyvan and Tabriz.

Each school uses ornaments, geometric shapes, compositions, colours, threads and drawings that are different and recognisable. The Azerbaijani people can identify these symbols and can interpret a carpet. This coded language is little known by the other cultures in the world and it is certainly a fascinating mystery.

As Hervé Mikaeloff, the curator of the pavilion, points out, “during the 14th and the 15th centuries, European painters started to introduce Azerbaijani carpets in their works. The ravishing play of colours and dizzying geometric patterns was a sign of exoticism. On the canvases of Memling, Holbein, Van Eyck, Carpaccio, Vermeer, the carpet is not just painted on the background, it is sometimes related to the main character on the foreground.”

He goes as far as to give some concrete examples of works, such as the painting Madonna Canonica by Jan van Eyck (15th century) with a carpet of the Zeyva region at the Groningemuseum, Bruges, the Scenes from the Life of Aeneas by Pinturicchio (16th century) depicting a rug of Ganja at the Palazzo Medici, Firenze, and in the triptych of the Mystical Marriage of St Catherine by Hans Memling (15th century), among other works with the “Memling carpet” at the Memling Museum.

The carpet was a symbol of wealth and a sign of high culture and Amsterdam, as one of the centres of European trade, was the perfect market for eastern exotic goods, and only the Flemish were able to distinguish the true from the lowbrow art crafts.

Nowadays, a new generation explores and updates this traditional art through a contemporary vision, raising the essence of ornament in relation with the perception of the national cultural heritage as a major artistic question.

Click here to read more on Ornamentation. The Azerbaijan Pavilion at the 55th Venice Biennale.